Clearing the Hurdles to a Career in Venture Capital

Prior to founding Agent Capital, a majority woman-owned international investment firm supporting disruptive healthcare companies in 2016, Dr. Geeta Vemuri was Managing Partner of the corporate venture capital (VC) arms of Baxter and then its spin out Baxalta, where she led investment decisions for a $300M pool of capital across multiple therapeutic areas of interest to the respective corporate parents. Here, Dr. Vemuri talks to Michael Wong about sustaining a successful career in the VC sector.

Michael Wong: With a mere 0.5% acceptance rate being the norm for some venture capital firms’ recruitment efforts,[1]what were the key competencies that enabled you to enter into a career path that seems to be extremely exclusive in terms of the selection process?

Dr. Geeta Vemuri: There were four key areas which I believe enabled me to enter and create a sustainable career in venture capital. First, while there are exceptions, entering the industry requires clearing a set of academic hurdles that are considered table stakes by most hiring managers. With one analysis uncovering that a mere dozen schools have produced over 42% of all venture capitalists,[2] it was helpful that I graduated from Wharton which is one of the top three feeder schools. Second, one needs to bring business acumen to the table and i-banking as well as consulting are the typical experiences, like my stint at Salomon Smith Barney as an equity research analyst, that hiring managers like to see. Third, one needs to bring expertise to the domain, and my doctorate work at the Indian Institute of Sciences provided me the knowledge and credibility to engage with c-suite leaders in spirited discussions. Finally, an underlying daily aspect of my job is risk taking. While many people say they are innovative risk-takers, given the three areas that I just described, the risks I take are measured ones tempered by my background and experience. And to succeed as a VC, you must couple this with humility and an understanding that you are not in this to get rich quick on a few smart deals – you need to do the work and have a servant-leader mentality to foster innovation and maximize returns. For many would-be venture capitalists, this mindset is a challenge if their prior playbooks of success rewarded relatively safe decisions. To have a sustainable VC career, I believe this fourth area is key.

Being Managing Partner and Founder of Agent Capital, one of only four majority-woman-owned, U.S.-based life sciences/biopharma venture capital firms, you must have a number of war stories to share with the readership. Still, what are three career recommendations that you would advise to readers who are interested in pursuing a sustainable career in venture capital?

Step one is to secure advocates who believe in your ability to make decisions which create value for the organization. When I led VC for Baxter and Baxalta, the c-suite empowered me and my team to make big bets on a number of investments that ended up creating value. Step two is to build and engage with a diverse team of colleagues who can help achieve the team’s goals. The average size of a VC firm is just seven partners, and multiple research findings, like McKinsey’s, have supported the financial value that especially gender diversity brings to the table.[3]Still, the VC industry is lacking in gender diversity as 65% of VC firms had zero female partners at the end of 2019. [4]I founded Agent Capital with a philosophy that guides our entire approach – that diverse management teams lead to superior investment returns and a greater ability for portfolio companies to develop the next generation of innovators and innovations.

Finally, having a trusted set of mentors whom you can trust to provide encouragement and candid feedback is my final recommended step. As mentioned earlier, for women and minorities, this industry is quite challenging to enter and extremely difficult to attain promotion to decision-making positions, so many choose to leave the industry mid-way through their careers. Thus, one major barrier to female founders raising capital is a persistent lack of female decision-makers at VC firms. As of August 2019, about 12% of venture firms and angel groups in the US had women in decision-making roles at the investment level.[5] Given studies that emphasize how female VC partners are twice as likely to invest in startups with at least one female founder and more than three times as likely to back startups with female CEOs, the discrepancy at the funder level is critical in this equation. It’s interesting, I think that sometimes we all would like a mentor who shares a common background in terms of gender, ethnicity and or other attributes since we feel that they share a similar journey and can understand the lens that we have on life. Still, since there are not that many women[6], much less colleagues who share a common Asian-Indian heritage within the VC industry, I’ve leaned into male mentors as well as females such as one of the first women pioneers in this industry, Dr. Brenda Gavin, whom I met at Quaker Partners. And despite her passing away in 2016, Brenda’s willingness to coach me has instilled a desire for me to pay it forward to mentor other up-and-coming future venture capitalists.

Michael Wong is an Emeritus Board Member of the Harvard Business School Healthcare Alumni Association. 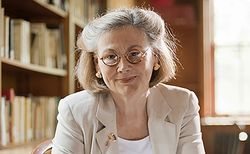