Our latest metrics tally across seven business-key measures uncovers some familiar players pacing the field in delivering shareholder value and getting the most from their investments.

Welcome to Pharm Exec’s 21st annual Pharmaceutical Industry Audit. We present a unique financial performance analysis of the top 18 publicly traded biopharmaceutical companies based on 2021 sales revenue and other financial metrics. We focus on a number of financial performance metrics, especially critical metrics such as growth in shareholder enterprise value, enterprise value to sales (EV/S), and return on invested capital (ROIC). Regarding the last metric, we introduced the impact of weighted average cost of capital (WACC) in September 2019. WACC adjusts ROIC by assessing the difference between ROIC and WACC. The difference measures the range of creating shareholder value among companies.

This year’s Audit relies on secondary reported information for the 2020–2021 time period. The metrics are also weighted reflecting their relative importance in assessing a company’s performance. Some metrics are more important than others. For example, sales growth is important, but sales growth can occur as a result of mergers and acquisitions and in-licensing. So it takes a back seat to more critical metrics such as ROIC, which measures how well a company is managed, including margin management (the profit and loss or income statement) and asset management (the use of assets on the balance sheet), and most importantly, whether ROIC exceeds the cost of capital (the cost of debt and the opportunity cost of stock equity, which are reflected by WACC).

Two metrics are included that are not weighted: sales, general, & administrative (SG&A), or overhead; and profit per employee.

The higher a company performs on a metric is reflected in a ranking based on the number of points it receives per metric. The highest metric for this year’s Audit is 18 based on the number of firms in our Audit. For example, if a company places 17th (second highest) on the critical metric (EV/S), it receives 51 points on the metric (17 rank x weight of 3). In another example, if a company comes in at a ranking of five (five places from the bottom), on the metric gross margin (pricing power), its total points would be 10 (5 rank x weight of 2).

Basic indices are the growth of the US economy and inflation. You have to be able to grow faster than the US economy: around 3% in 2021 and higher than inflation as measured by the Consumer Price Index (CPI), about 2% for 2021. As we continue presently in 2022, inflation has soared relative to 2021. Other important benchmark metrics for 2020 include:

Table 1 shows sales in US dollars along with sales growth for our 18 pharmas. It is good to grow, especially organically, compared to just acquiring companies. But that’s easier said than done for companies at high sales levels such as Johnson & Johnson (J&J), Novartis, and Roche.

Eenterprise or shareholder value and growth

This is the first of the three crunch metrics; EV/S and ROIC are the others. There are other worthy performance metrics (e.g., corporate responsibility, sustainability, the best places for women and minorities to work,etc.), but our focus is financial performance and enterprise value and growth. Did a company create or add to shareholder (enterprise) value or destroy shareholder value?

EV is the sum of an organization’s market capitalization; then add in debt and adjust for cash and other current assets. Simply put, EV is the market value or market capitalization of a company. Table 2 shows the pharma with the highest EV is J&J at $475.4 billion. The company that grew its EV the most was Eli Lilly. To put that in perspective, the average EV for our 18 pharmas in 2020 was $187.2 billion. Half of the companies increased shareholder or enterprise value, with the other half showing decreases in enterprise value.

EV and EV growth are very important performance metrics. EV/S supplements that metric by assessing which firms are still climbing vis-à-vis so called “value” stocks—stocks for widow and orphan drugs that, if not growing in upside market cap, still pay noteworthy dividends and are solid businesses.

Table 3 lists EV/S. The average EV/S for 2021 is 4.5. At the top is Lilly at 9.8. Coming in a close second is Novo Noridisk at 8.8. The higher the EV/S ratio, the more likelihood the company’s performance is going to get better. EV/S is impacted by factors on the horizon for a drug manufacturer. According to a column by Evaluate Vantage’s Lisa Urquhart published in May, the relatively high numbers for AbbVie and the other companies over the average EV/S of 4.5 is due to a fresher stockpile of recent introductions, or as Urquhart terms it, better prospects reflected by a firm’s “freshness index”—what percentage of its product portfolio is less impacted by patent erosion.

Yes, there is net-net and list price vs. net price, but at the end of the day, there is gross margin, which is tantamount to markup. As Warren Buffet would call it, “the moat around your castle.” Gross Margin reflects an organization’s power to maintain or, even better, increase price.

This metric represents total revenue minus cost of goods sold from the income statement. This is quintessential margin management: how price is managed while simultaneously managing operating costs to produce net income. The higher the gross margin is, the more a company is able to cover operating expenses, including SG&A.

Table 4 shows Novo Nordisk at the top with a gross margin of 82%, a slight increase over 2020. The biotechs rule pricing as they have ever since the first Pharm Exec Industry Audit in September 2002. But note the significant drop in gross margin average for our 18 pharmas, from 67% in 2020 to 65.9% in 2021. Only seven manufacturers were able to increase gross margin last year, compared to nine firms in 2020.

Note the extraordinary profitability of Novo Nordisk. Its pre-tax income margin increased slightly to 42%. Most companies would be happy with a gross margin equalling that percentage.

Gross margin and pre-tax operating income have to do with margin management; sales to assets has to do with asset management. If a firm is at $70 billion in sales, for example, it won’t be doubling revenue anytime soon. If the company has also curtailed SG&A and disposed of assets, it won’t be cutting operating expenses in half anytime soon either. Then it turns to asset management to do a better job making use of, not necessarily owning, assets.

When you multiply profit to sales (pre-tax operating income) by sales to assets (asset management), you get a far more important measure: return on assets. A company can have a relatively low profit margin with a relatively high sales-to-assets ratio that will result in a better performance in terms of ROIC.

As seen in Table 6, Novo Nordisk’s sales-to-assets ratio is 0.8. For every dollar invested in assets, Novo Nordisk gets back 80 cents. Roche comes in at No. 2, getting back 70 cents for every dollar invested in assets. In our latest Audit, only six companies rank at the average sales-to-assets ratio or above regarding how productive they are in managing their assets.

Now we come to the mother of all metrics: ROIC. ROIC is net income left over to shareholders as a percent of debt and common stock. According to longtime organizational consultant Mark Van Cleaf in The New York Times, the best measure of business performance is ROIC—how much is a company generating on its capital investments, plant and equipment, minus the cost of that capital, debt, and equity? Combine this with our relatively new addition to the Audit: weighted average cost of capital (WACC). According to Van Cleaf, management should be providing value that exceeds its cost of capital. For example, two organizations can have a ROIC of 10%, but company 1 has a WACC of 12% while company 2 has a WACC of 7%. The first firm is destroying shareholder value while the second one is creating shareholder value.

Prior to the mid-1980s, the conventional wisdom was that debt had a cost (the rate you pay for borrowing), but issuing stock was free. But what if the peer groups an organization competes with have a higher ROIC than the company? Even though the firm shows a profit, it is destroying shareholder value if its profit is below its peers’ average. What return could an investor get by investing in an organization of equal risk? This was the brainstorm of Stern Stewart, a consulting firm based in New York City.

Our source for WACC relies on three years of income statements and balance sheets to arrive at a company’s WACC.

The greater the difference between ROIC and WACC, the greater the return to shareholders. Aside from Novo Nordisk’s outsized ROIC, the firms with the most impressive creation of shareholder wealth for 2021 were Roche and Novartis, followed by Lilly in fourth place. Fourteen of our 18 companies created shareholder value in 2021.

This metric is not weighted in the rankings. It is interesting, however, to show how profitable the pharma sector is. According to FactSet, for 2021, Gilead produced the most profit per employee at $438,290 each, as indicated in Table 8.

SG&A (see Table 9 below) is another metric that does not impact the rankings. It is still important because the expenses in this category are necessary to run an organization and constitute routine spending such as rent, salaries, advertising, marketing, legal, and more. Laying off and firing workers costs money in severance before it begins to pay off. It’s also important to keep in mind that this is a one-year comparison. A company can be making investments in advertising, training its sales force, etc., and that will pay dividends down the road. One swallow does not a season make.

Opportunities exist to cut advertising costs by being more efficient with agencies and revamping supply chains. Also, SG&A can increase, but it is the goal for sales growth to grow faster, thereby lowering the SG&A-to-sales ratio. Ballooning overhead leaves a firm inefficient and less productive than it otherwise could be.

Top of the pack

Table 10 above reveals the winner of this year’s Audit: Novo Nordisk, which captured the top spot for the fourth straight year. Lilly again finished a close second, followed by Roche, AbbVie, and Pfizer rounding out our “Fab 5.”

Finally, I want to return to a performance discussion we touched on in the past: The Dr. Bill Trombetta Hall of Fame for Outstanding Management Performance. In a few editions of the Audit we focused on two measures: profit to sales multiplied by sales to assets = profit to assets, a crude version of the more powerful performance metric: ROIC. I want to go back to such a year capsule evaluation, but in terms of a new metric, PSE—profit grows faster than sales/and sales grow faster than expenses (SG&A). I am calling this “Dr. Bill Trombetta’s Annual Pharmaceutical Executive Pharmaceutical Industry Audit Trifecta.”

What doth it profit a firm whose sales growth is exceeded by its growth in SG&A (overhead, burden)? And what if sales growth is lower than the growth in profits? Again, it would be unfair to penalize or reward a firm for its SG&A spend in a given year: the variable cost spend could be an investment that will pay off in the near future or it may be a sign of overhead bloat.

But in a given year, if a company can grow its sales faster than SG&A spending and grow its profits faster than the growth of its sales, this is worth recognizing.

Sales should grow faster than SG&A spending over time. And profit growth should exceed sales growth. What does it mean if revenue grows faster than profit? It suggests that the organization is profiting less from each dollar of sales revenue. Perhaps sales growth is growing in strategic business units or product lines that carry lower profit margins. It also could mean increasing competitive pressure.

Given the rationale above, our top Trifecta performers in no particular order for 2021 are Pfizer, AbbVie, and Gilead. Hats off to this trio for a well-managed financial performance for 2021.

Bill Trombetta, PhD, is Professor of Healthcare Strategy & Marketing at St. Joseph’s University Haub School of Business in Philadelphia. He can be reached at trombett@sju.edu 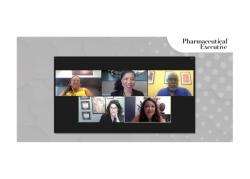