Accelerating the Drive for New Antibiotics

There’s a rising clamor for new medicines to combat infectious diseases and lethal pathogens resistant to existing treatments, but few promising therapies are in the biopharmaceutical R&D pipeline. The situation raises fears of a “post-antibiotic” age of super-resistant superbugs, a prediction made more real by the recent diagnosis of a Pennsylvania woman with a highly resistant rare infection.

Anti-infective therapies are difficult to develop, and clinical trials complex and costly. As of March 2016, only 37 new antibiotics were in development, and just 13 in Phase III clinical trials-way less than some 500 oncology therapies in the pipeline. No new classes of antibiotics have been discovered since the 1980s, according to an analysis by the Pew Charitable Trusts. In addition to serious scientific and clinical challenges, there are difficult financial issues to overcome, as any new, effective antimicrobial faces tight “stewardship” policies that limit use to prevent resistance.

Meanwhile, efforts to slow anti-microbial resistance (AMR) focus on reducing inappropriate drug use, particularly for agricultural purposes and for treating viral infections where antibiotics do little good. Nearly 50 million unnecessary antibiotic prescriptions are written each year in the US, and even more in Europe and Asia, according to a

by Pew and the Centers for Disease Control and Prevention (CDC) that was published in the Journal of the American Medical Association in May. A recent review of AMR headed by Jim O’Neill of the UK urges a major public education campaign to curb ineffective antibiotic prescribing, plus increased use of vaccines to prevent the spread of infectious diseases in the first place.

There’s also a clamor for more public funding and collaboration on research to develop new antibiotics. At the World Economic Forum in January, more than 80 drug and device companies backed efforts to develop medical products to combat drug-resistant infections, and other R&D partnerships aim to spread risk through increased data sharing. In the US, the Biomedical Advanced Research and Development Authority (BARDA) and the National Institute of Allergy and Infectious Diseases

(NIAID) are establishing a “Biopharmaceutical Accelerator” that will advance funding and support for early development of candidate antibacterials.

Additional financial incentives aim to draw industry investment in this area. The O’Neill report and others propose billion-dollar rewards or prizes to developers of new antimicrobials, a strategy that aims to compensate for limited prescribing and marketing of new treatments. Yet, O’Neill’s “play or pay” strategy to fund the awards with levies on biopharma companies that don’t invest in antibiotic R&D has drawn fire from industry as “punitive” and likely to backfire.

Congress is considering added initiatives that build on the GAIN (Generating Antibiotic Incentives Now) Act of 2012. That established the qualified infectious disease product (QIDP) designation for antibiotics and antifungals that treat serious or life-threatening infections. So far, FDA has granted 107 QIDPs to 63 different molecules, providing them with priority review and five additional years of market exclusivity when approved, as has occurred for six therapies.

Even so, the pipeline for new antibiotic drugs “is fragile and weak,” said Janet Woodcock, director of the Center for Drug Evaluation and Research (CDER), at a June hearing before the House Energy & Commerce Committee on antibiotic resistant “superbugs.” She cited scientific challenges in identifying new targets and testing candidates on critically ill patients. FDA is working to streamline clinical research for new antibacterials by identifying new biomarkers and forming a clinical trial network with common protocols that can be tapped quickly to test groups of patients. Woodcock and others emphasized the importance of developing rapid diagnostics that can differentiate bacterial and virus infections and help identify best treatments for patients to avoid ineffective prescribing. These and other challenges will be examined more at an FDA public workshop July 18-19 at FDA’s White Oak campus.

Further support could come from the 21st Century Cures Act approved by the House in July 2015, which includes the Antibiotic Development to Advance Patient Treatment (ADAPT) Act that permits FDA to approve antibacterial drugs to treat

serious or life-threatening infections based on small clinical trials. Similarly, the Senate’s Promise for Antibiotics and Therapeutics for Health (PATH) Act authorizes FDA approval of new antibiotics for a specific, limited patient population with life-threatening infections. This version of the limited population antibacterial drug (LPAD) approval pathway devised by the Infectious Diseases Society of America permits product approval based on a small clinical studies, combined with strict postmarket scrutiny and curbs on product promotion.

The PATH Act has strong support from a long list of research, medical and public health organizations that seek to include it in budget bills moving through Congress. Yet, some consumer groups fear that less rigorous testing for new antibiotics could pose greater risks to patients.

There are signs that added funding and incentives for antibiotic development are bearing fruit. BARDA acting director Richard Hatchett told the E&C committee that a program supporting development of broad spectrum antimicrobials has helped move seven drugs into advanced testing, including a project with Astra Zeneca that is also supported by the EU’s Innovative Medicines Initiative. Woodcock acknowledged that it’s difficult for pharma companies to actually make money on antibiotics: once you get a new antibiotic on the market, she explained, everyone wants to prevent its sale to preserve its effectiveness.

Yet, the critical need for new antibiotics at home and abroad provides a real opportunity for pharma companies to tackle these scientific and financial hurdles and demonstrate their capability for bringing needed medicines to the world.

Jill Wechsler is Pharmaceutical Executive’s Washington correspondent. She can be reached at jill.wechsler@ubm.com 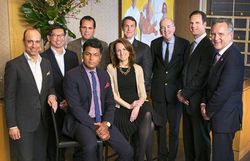 Transforming Technology: The Future of the CIO in the Life Sciences

Worlds Beyond the Clinic