From the Editor: Lost World

Leo H. Sternbach's death feels like the end of an era, a time when the new drugs came easily and it was possible to have a huge impact on patients, then turn around and do it again.

It's the kind of story that used to be a staple of the movies. The impassioned scientist, having spent years on experiments that produced only failure after failure, is told to shut his project down. As he clears his famously chaotic laboratory bench, he discovers a container of white crystals that he synthesized more than a year ago and then forgot about. Should he just discard the compound? Perhaps, but he doesn't. He sends it off for pharmacological testing. And then . . .

And then, shades of Hollywood, the report comes back and says the compound, chlordiazepoxide, is very interesting. After a series of trials (including one that would probably never be undertaken today, which involved soothing the leopards, lions, and tigers in the San Diego Zoo), Librium, as the new drug was called, was ready for market. It was, as we all know, a huge success, and opened the path to the benzodiazipine category and, many would argue, the modern approach to psychopharmacology. The man who discovered it was Leo Henryk Sternbach.

When Sternbach died this past September at the age of 97, the papers all took note of his passing with obituaries that mapped out his career. And what a career it was. Sternbach worked for Roche for more than 60 years, from 1940 until 2002. (He officially retired in 1978, but continued in a consulting capacity.) In that time, he discovered a dozen drugs, including the sleeping pills Dalmane (flurazepam) and Mogadon (nitrazepam), Klonopin (clonazepam) for epileptic seizures, and of course Valium (diazepam). His name was on 230 US patents; when he retired, his patents made up 20 percent of the company's portfolio. At one point, drugs he discovered were responsible for 40 percent of Roche's sales.

The big one, of course, was Valium, a breakthrough drug in the treatment of anxiety, a breakthrough in drug safety, and the world's first blockbuster. In terms of annual sales, it wasn't huge compared to today's top sellers—at its peak in 1978, it had sales of $600 million, a bit less than $2 billion in today's dollars. But the numbers belie Librium's commercial impact. It was the most prescribed prescription drug in the United States from 1969 through 1982. One survey taken in the UK in 1976 found that it accounted for one prescription in 20. Librium's popularity led to overprescribing, an inevitable backlash (and the terrific Rolling Stones song "Mother's Little Helper"), but it was an undeniably important step forward.

Leo Sternbach was an extraordinary individual, and it's always sad to lose people like that. But coming as it does, in a year when the industry is under ceaseless assault, when the drugs just aren't coming the way they used to, and when the future looks bleak, Sternbach's death feels like the end of an era. It's always tempting to turn the past into a golden era, but there truly was something golden about Sternbach's prime, the opening days of the blockbuster era: plenty of low-hanging fruit, an approach to drug development that was yielding lots of results, the possibility to create a huge impact on patients and then turn around and do it again, the optimism about the future of drugs.

Can any of it come back? There are inklings of answers out there in systems biology, in new approaches to development, in new technology that promises to return to scientists the ability to be intuitive and creative. The trick is to use them to create not just new products, but a new working environment in which science can accelerate, and pain and disease can be pushed back, product after product. Leo Sternbach is gone, but there's no law that says we can't recover the optimism, creativity, and productivity of his lifetime. If the industry succeeds in doing that, it could be the greatest pharmaceutical discovery yet.

Patrick Clinton is Pharmaceutical Executive's editor-in-chief and can be reached at pclinton@advanstar.com 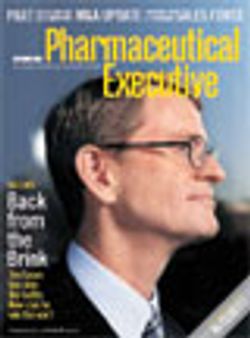 Are We Aligned Yet? A Medicare Part D Roundtable