Pharma companies spend the most money looking at what their competitors have already done. Here, three companies explain how competitive intelligence should work.

Just Because The Pharmaceutical Industry is the most frequent user of competitive intelligence (CI), it doesn't mean it is the most effective. In fact, a survey of senior executives at large US corporations, across industries, shows that despite the millions of dollars pharma spends, only one company—Johnson & Johnson—ranks among the top-10 companies that make the best use of CI.

In many ways, that has to do with the way pharma thinks about collecting intelligence. Most executives use CI to compile competitor newsletters, profiles, and other static deliverables to understand what actions their competitors have recently taken. But there's no strategic advantage in that. To succeed, pharma execs need to anticipate threats and opportunities before they occur. At their very core, CI functions need to be designed to deliver predictive, actionable intelligence that minimizes surprise—not just reports recent competitor actions. Indeed, when establishing Lilly's CI function, former Lilly CEO Randall Tobias called it the "department of surprise avoidance."

In the past several years, a small number of pharma companies have taken steps to use CI more proactively. Rather than just monitoring competitor actions, these companies' CI units work to anticipate new threats and opportunities, to develop preemptive strategies for launching or defending products, and to help build the overall competitive awareness of their organizations. This article examines a few trailblazing companies, and offers some advice on how to use competitive intelligence more effectively.

Lilly established its CI team in 1998 to serve the highest levels of the organization and to advise top executives about longer-term threats and opportunities. Company executives were very supportive of the unit because the need for better intelligence was apparent: The industry was changing rapidly and the level of competition had increased dramatically. These executives—some of whom had been intelligence users in the US government—understood the benefits that top decision-makers gain from knowing about emerging threats as soon as possible. In fact, running a large pharmaceutical corporation without an effective CI capability, says Lilly's head of competitive intelligence, Jerry Hoffmann, is tantamount to "making your key decisions with one eye closed."

As Lilly's intelligence effort developed, its focus broadened beyond the top executive suite. Today, the company's CI team provides more support at the business-unit level, delivering intelligence to the leaders of those groups and others, while acting as advisors and training referents to teams within the organization. This is a trend not only at Lilly, but also at other companies with well-developed intelligence efforts, within and outside of the pharmaceutical industry.

According to Hoffmann, Lilly's CI effort has contributed significantly to a company-wide initiative to become more externally aware. CI teams are often called upon to facilitate initiatives that require their unique perspective, from scenario-planning projects to war-gaming exercises and competitor-response modeling.

The use of CI at Lilly not only leverages internal expertise and resources, it also helps build a competitive culture at the company. The belief is that this culture will further reduce risk by encouraging the development of good CI prior to every significant decision. To date, the company has seen pervasive growth in the use of CI. The corporate strategy group regularly requests CI in support of long-term planning efforts, recognizing that competitors' actions can change the future business environment just as other outside forces can. Marketing groups use CI to understand everything from how competing companies will address big-picture issues like the Medicare prescription drug benefit to how a single competitor will evolve its product positioning. On the other hand, R&D is increasingly reliant on CI to help reduce the risks, thereby lowering the costs of discovery and development.

Peggy Walker, the CI manager of the pharmaceuticals division at 3M, sees intelligence deliverables falling into two broad categories: widely disseminated current intelligence on critical issues in the marketplace and strategic deliverables that examine longer-term issues for the top management team. Together, these CI activities enable better information connections and business decision-making at all levels of the organization. The goal is to ensure that employees across various functions—R&D, marketing, business development, and market research—incorporate intelligence practices into their work.

3M's pharma division redesigned its CI process in 2003, and it has already been singled out for several internal best-practice awards at the corporate level. Walker sees the benefits of the division's process through its discussions. "The richness of the information and your ability to make forward-looking decisions depends on many minds looking at the same information and sharing their different perspectives, with an eye to the future," she says.

3M executive-committee members have been among the first in the business to realize the benefits that competitive intelligence can bring to their decisions about direction setting and strategic planning. Product managers are incorporating intelligence to increase market share, anticipate and model possible competitor moves, and develop preemptive strategies for new product entrants. R&D scientists are more business savvy and aware of competitive technologies because the process includes information systems and evaluation tools that result in analyses and predictive intelligence, not just CI based on past history. Other businesses within the 3M organization have approached Walker about establishing their own CI capabilities.

AstraZeneca's CI professionals have played a similar leadership role in helping their company learn and employ new techniques for anticipating future threats and opportunities. Several years ago, the company's CI team spearheaded the effort to incorporate scenario planning into the strategy process for the company's US commercial group.

Using existing marketplace knowledge as a starting point, the CI team and company managers developed a series of plausible future scenarios that bounded the ways in which the future marketplace might develop. From these scenarios, AstraZeneca developed a set of strategies that would be resilient across a wide variety of possible futures. Indeed, those scenarios are still in use today.

Perhaps most important, the team was able to identify options that worked across all scenarios, so it could begin implementing aspects of those scenarios with confidence far in advance. To ensure that the management team was kept up-to-date on key events that might necessitate a change in strategic direction, the intelligence team developed a set of intelligence indicators, or signposts, for which it could scan, so that it could alert the company as soon as possible if a significant change was underway.

As a result of this process, AstraZeneca was able to develop a set of strategies that it knew would work regardless of the future marketplace, and it could begin implementing those strategies right away. And because the company has developed alternative strategies for different plausible futures, it has the flexibility to respond with actions once it receives early warning from its CI team that a major change is imminent.

The pace of change in the pharmaceutical industry is not likely to slow in the foreseeable future. The competitive advantage will clearly fall to organizations that can acquire and use vital information faster and more efficiently to outflank their competitors. For product managers in particular, CI and its associated tools offer a proven way to develop forward-looking strategies right now, rather than scrambling to react to competitors' moves after they occur.

Bill Fiora is president and founder of Outward Insights, a competitive intelligence coaching and consulting firm. He can be reached at bfiora@outwardinsights.com 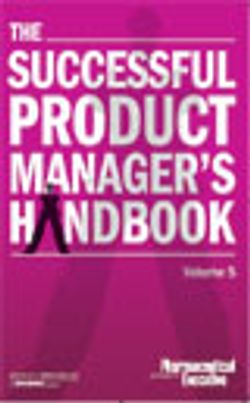 The Low Cost of High-Impact Ads

e-Marketing at the Tipping Point