Pricing Climate Heats Up in US and Europe

In 2003, Big Pharma produced only a dozen new drugs. At the same time, it came under new pressure to create value from those thin pipelines. In that "hot squeeze" of a climate, pharma companies needed price premiums for every product in every market. They were more successful in some countries than in others. Other pricing trends also took their toll.

It was a landmark year from a cost-containment and pricing and reimbursement perspective. We experienced some major events that will have lasting effects on the pharma industry," says Ron Baynes, Cambridge Pharma Consultancy executive vice-president and co-author of a new pricing/reimbursement report for 2003. Among Baynes' highs and lows for the year:

With fewer new products coming to market, the industry must squeeze maximum economic value from every new drug-both at launch and during a brand's lifecycle. To achieve that, it is crucial for companies to negotiate optimal price levels and gain rapid market access while minimizing the level of prescribing restrictions. "This can only be achieved by including pricing, reimbursement, and positioning considerations into clinical and health economic studies for the brand at first launch, and also for line extensions and further indications," Baynes comments.

But the pricing and reimbursement report also notes that pharmaceutical companies appear to be spending greater resources in developing new indications and line extensions of their existing blockbusters.

So how successful were the leading companies at driving the economic value of their pipelines in 2003? The picture was different between the continents: In Europe, one-third of launches were priced at a premium to the closest comparable product; in the United States, two-thirds were. (See "European Shortfalls" and "US: Premium Market," page 68.)

Another first-in-class entry, Wyeth's InductOs (dibotermin alfa), secured a higher European price point in its therapy area (acute tibial fractures), as did Lilly's Forteo (teriparatide) in osteoporosis and Abbott Labs' Humira (adalimumab) in rheumatoid arthritis, where it launched at a premium to Wyeth's Enbrel (etanercept) in most markets.

Market access. Although innovative products may consistently achieve premium prices, pricing and reimbursement hurdles hinder market access in both Europe and the United States. Most of the 2003 drug launches in Europe have yet to be granted reimbursement status in the major price-regulated markets of France, Italy, and Spain. And the speed of market access is not improving significantly. "[European Union] products launched in 2003 showed patchy performance in terms of roll-out, but generally accessed European markets slightly faster than the average of the past five years," Baynes notes. "Both Lilly's Cialis [tadalafil] and Bayer/GSK's Levitra [vardenafil] achieved rapid launches, though without reimbursement. The only community product to launch rapidly with reimbursement was Roche's Fuzeon."

The Price Gap, Imports Ease Up

Price harmonization. The current pressure on the industry to create value from thin pipelines means that global or European price harmonization is no longer a strategic objective (if it ever was). Just two products launched in 2003-Fuzeon and Forteo-achieved similar price levels in the United States and Europe. For the rest, the lower price of existing benchmark products in Europe meant a significantly reduced price. (See "The Price Gap," page 70.) AstraZeneca's Crestor (rosuvastatin), Lilly's Cialis, Pfizer's Bextra (valdecoxib), and Merck's Emend (aprepitant), for example, have average European prices that are more than 60 percent below their US prices.

Despite the public and political rhetoric calling for similar price levels in the United States and Europe, there is little progress on the ground because pricing in Europe is still constrained by price-sensitive payers, prescribers, and health systems. Companies are prepared, more than ever before, to take a high price where they can and deal with the ramifications of wide price differentials as a separate issue. Baynes advises, "Senior management should continue to develop and communicate clear corporate policies regarding differential pricing and be prepared to manage the inevitable political debates that will arise."

Although price disparity continued, parallel trade growth in the major import markets of Germany and the United Kingdom slowed in 2003. After two consecutive years of 66 percent annual growth, parallel imports in Germany grew just 4 percent in 2003. In the United Kingdom, Europe's largest parallel import market-with 2002 sales of 2 billion euros ($2.4 billion)-growth was 1 percent, compared with an average of 30 percent growth during recent years. (See "Imports Ease Up.") UK parallel trade had been concentrated in a handful of market-leading brands. It is becoming less concentrated. Twelve products accounted for 50 percent of parallel imports in 2002, while 15 drug accounted for half the market in 2003.

All of which indicates a shift in parallel trade dynamics not entirely explained by price changes and patent expirations. Prices were constant in the United Kingdom and Germany during the period, and although the exchange rate meant that prices in pounds fell relative to the whole Eurozone, some products and companies continued to experience growth in parallel trade. Cambridge parallel trade specialist, Janice Haigh, explains: "For the first time, we have evidence that it is possible to make a difference to parallel trade. Companies with effective supply management strategies are limiting, or even reducing, parallel trade in their products. Companies that do not implement such strategies face a significant increase in parallel trade, as traders look to fill the gaps."

After many years in which the industry's legal actions backfired in favor of parallel traders, the tide finally may have turned. "The European Court of Justice's final ruling upholding Bayer's supply management system for Adalat [nifedipine] in France and Spain provides further evidence of this sea change," adds Haigh.

Yet responsible pricing appears to have minimized the threat of parallel trade, at least in the short term. "The pharmaceutical industry's current strategy seems to be to maintain price, possibly at the expense of reimbursement and volume sales in the accession markets," says Haigh. In any case, contrary to perceived wisdom, there is relatively little difference between drug prices in new and existing member states. "The lowest price at which parallel imports can be sourced from the accession markets is rarely significantly below the current EU floor price," she adds. (See "New Members, Same Prices.")

Yet even though narrow price differences and modest volumes mean that parallel trade will be limited in the short run, east-west parallel trade will increase in the medium term. "Over the next five years, we are likely to see growing volumes and declining prices, which could open the gates to parallel trade," says Haigh. "Like elsewhere in the EU, wholesaler margins are under pressure in the accession markets, and participating in parallel trade is seen as an opportunity by many wholesalers."

Public finance for healthcare is likely to remain a limiting factor in paying for more expensive treatments in the new member states. As a result, healthcare authorities will have to develop ways of providing access to pharmaceutical products, while remaining within their budgets. Governments in the accession markets are already developing mechanisms to control expenditures and are learning from cost-containment measures elsewhere in Europe. Poland, for example, has adopted Germany's therapeutic referencing and substitution rules and is using volume restrictions similar to those in France.

France and Germany are in the vanguard of current European cost-containment initiatives. After years of spiraling expenditures, Germany, in particular, has taken a sharpened ax to pharmaceutical spending. "The authorities are looking for 2004 savings of 1.5 billion euros [$1.8 billion], rising to 3 billion euros [$3.6 billion] in 2007-by re-introducing reference pricing for patented drugs that lack a significant clinical advantage," says Cambridge European pricing specialist Chris Sutton. "The need to meet these savings goals strongly incentivizes the authorities to add new, high-cost groups with arguably little differentiation between products to the reference price system." Classes affected could include such mainstays as ACE inhibitors, selective serotonin reuptake inhibitors (SSRIs), inhaled corticosteroids, and atypical antipsychotics.

"Previous experience in Germany suggests that patients are highly motivated to avoid co-payments, and companies will therefore need to reduce the price of clustered products to the reference level to prevent rapid erosion of market share," Sutton adds. The combined effect of companies lowering their prices along with periodic downward revisions of reference prices will lead to a prolonged period of downward price movement. Sutton thinks the best way around the problem is to avoid clustering and maintain price freedom through product differentiation.

"Differentiating new products early in the R&D process will become even more important to avoid reference pricing," he says. "For products already in Phase III, special positioning skills will be needed to reduce the potential for clustering.""

The United States is also embarking on an unprecedented round of cost-containment initiatives in preparation for the Medicare prescription drug benefit, which will begin in 2006. "Health plans will be motivated as never before to shift usage to generics and offer limited access to expensive brands," predicts Pamela Santoni, vice-president in Cambridge's US division. As pharmacy benefit managers (PBMs) participate in Medicare Pre-scription Drug Plans (PDPs), they will shift their business from a rebate-driven revenue model-which drives drug use toward preferred brands-to a risk-based cost-control model that drives usage to the cheapest products.

In addition, PDPs will attempt to extract greater rebates from pharma companies because the additional Medicare population with prescription coverage will add to the volume of drug consumption. Santoni says, "The impact on drug usage among seniors will be determined by two factors: the latitude over utilization control that the government grants to plans and the extent to which the government squeezes plans with reduced capitated payments and increased risk."

With health plans managing their drug benefits more tightly, "pharmaceutical companies must focus earlier and more creatively on pricing, positioning, and access issues," says Santoni. For example, companies can show that their drug is superior to competitors by engaging in head-to-head trials that should raise ethical questions about access restrictions to the better product.

Likewise, companies can create compelling stories for employers and patients by redefining product value. This can be achieved by focusing on health outcome messages, coupled perhaps with performance guarantees. "It is no longer the case that broader indications are better for driving product volume," Santoni comments. "Since step therapies and prior authorizations will increasingly become the norm as a means of driving product usage to less-expensive therapies, companies might consider more-restrictive labels as a means of gaining unfettered access to narrower populations and potentially avoiding pricing pressures. And by defining new therapeutic classes, companies can gain mandatory access because PDPs must offer more than one drug per class."

Until the enactment of the drug benefit-and quite possibly beyond-price-conscious US consumers are expected to continue filling their prescriptions at Canadian internet pharmacies. IMS Health estimates that US importation of prescription drugs from Canada was about $1.1 billion in 2003, an increase of 134 percent from 2002.

Despite the numbers, imports remain a small component of total US sales (0.5 percent), but the issue commands a high political focus because it graphically highlights the price differences north and south of the border. "Regulators will have to act soon," says Paul Saatsoglou, Practice Leader, Global Resource/Portfolio Optimization, IMS Consulting. "The choice is between legalizing imports to some extent or an unequivocal statement that imports are not legal and that action will be taken against those involved."

"Cross-border purchasing could explode if-as seems increasingly possible-a law is passed making the practice legal," he adds. The risks to revenues on high-volume, cross-border brands could be calamitous. For the time being, though, growth appears to be slowing. Internet pharmacy sales were down in the fourth quarter of 2003, compared with the third quarter-most likely as a result of manufacturers' interventions to limit internet pharmacies' access to their products.

"Companies will continue to manage the supply chain to limit the success of large internet pharmacies by using tactics similar to the supply management systems used in Europe," Saatsoglou concludes. 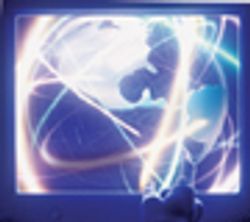 One World, One Voice 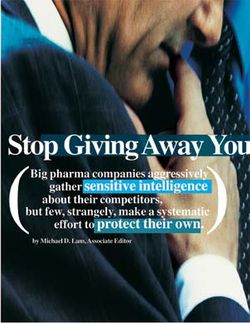 Stop Giving Away Your Secrets