The Pros and Cons of Project BioShield

Acambis'smallpox vaccine will be among the first biodefense products to come to market under the three-month old US BioShield law.

Three years after the terrorists attacks and anthrax scare in the United States—and after much debate—Congress finally passed the BioShield legislation that will fund private sector development of anti-bioterrorism products. But, like other bills, it is the result of compromise, and many in the industry think its shortcomings will keep pharma companies from participating. But some companies are already taking advantage of the US government's support of bioterror initiatives. Here, Acambis CEO Gordon Cameron discusses the pros and cons of both BioShield and contracting with the government to develop biodefense products.

Pharm Exec: The government has earmarked $5.6 billion in BioShield funding. Does the money match the need?

I think as they get into the process they will probably find that they won't have enough money. There are always things that people haven't thought of and things that come up. These are R&D programs that, by definition, are somewhat uncertain.

For example, the actual procurement price of our vaccine is still to be fixed. At this stage, there are just estimates, and the number of vaccines has not been nailed down either. And with anthrax, for example, if it uses up more funds than intended, something else will fall off the end or they will need to get more funding to make up the shortfall.

We have witnessed some of that already with our own program, the smallpox vaccine, in which we got a contract at the end of 2001 to develop a new vaccine and begin clinical testing. It is possible that by early next year, which is just more than three years after we started, we might be in a position to file a BLA [biologics license application]. It's partly a function of the nature of the product, but it's also a function of the way we have been able to rapidly move through the clinical trial process. We have had a lot of interaction with FDA, which has meant quick turnaround of documentation. If inspections of facilities are required, they tend to be done quickly. So yes, I think we are a testament to that process actually working quite well.

If, during a crisis, FDA allows the use of certain products that have not been thoroughly tested, who is liable if people suffer negative side effects?

Addressing this issue was a precondition for our involvement in these programs. It certainly was for the smallpox vaccine contract that we won. We sought and obtained indemnification through the government, through HHS [Health and Human Services] and the Department of Homeland Security, ultimately to provide indemnification for us. So certainly for us that is a precondition, particularly if you are talking about the possibility of using unlicensed material.

Would you advise any company entering into an agreement with the government for a bioterrorism product to do the same?

I would. People can debate what the actual risk is. But nevertheless, it is a risk. You have millions of doses being supplied to the government that can be used very quickly in an emergency situation. In most cases, it could be an unlicensed vaccine. Therefore, for a company not to be considering an indemnity-type situation, I think, would be potentially quite risky. As a public company, they shouldn't be subject to that unnecessary risk from litigation.

Does the BioShield legislation address the price issue adequately or should pharma companies going into the bio-terror business be concerned?

I think there are two issues: There is the up-front procurement—how many doses does the government want to order initially, which generally can have a fixed, agreed, up-front price. That's easy enough. It's the future orders that some companies are rightly having difficulty with in terms of trying to agree on a price. And likewise, the government is also having difficulty being able to commit to pay a particular price that many years hence. I believe the legislation needs to give more freedom or ability for the government to commit to longer-term procurement of a product at pre-agreed prices or with some kind of flexibility.

Again, from a risk management point of view, we don't want to have to commit to a price that seems reasonable today, but two years down the line you realize the manufacturing is 10 times harder than you thought it would be. Now you are locked into a very unattractive price. The freedom to commit to future, longer-term purchases is important. To some degree, it is covered by BioShield, but I think it should be some broader ranging legislative issues associated with that.

What about patent protection? Does BioShield offer enough?

My view is that it is pretty much down to the companies to look after their own IP [intellectual property]. Under BioShield, a company could develop a particular product, but couldn't manufacture it, for example. There might be the risk that the government could take the IP or proprietary position and give it to somebody else to manufacture, and therefore, get some kind of large contract on the back of another company's development work. IP is our bread and butter. We are used to protecting ourselves. So I think that to a degree, it's the companies' responsibility.

What about situations in which the government might be tempted to toss out the rules and do what is best for itself or for the public?

You mean like the Cipro example? Certainly that particular episode, I'm sure, has scared some people away. No one wants to be caught in that situation again. Likewise, we shouldn't be holding the government and the public health authorities' feet to the fire. At the end of the day, we are commercial companies, but we are also engaged in protecting public health. So there is some balance to be struck there.

One of the administration's claims is that BioShield will spur drug development in areas other than bioterrorism. Do you think that's true?

I think it's pretty limited. Because biodefense focuses on particular pathogens that are relatively well understood, and it's just a case of taking the particular disease and developing an approach to try and combat it therapeutically or prophylactically. Does it lead to other technological approaches? Not necessarily.

For Acambis, the contract to develop and produce a smallpox vaccine forced us to build some infrastructure in the company which we can now use for other pipeline products. Operationally, it has been very beneficial for us. Technologically, not particularly. And if you can make some money from these contracts, then obviously that in itself allows you to develop other products from the cash inflow. We have to recognize that the biodefense opportunity is a short- to medium-term one. It's not a long-term piece of pharma's business models.

So you know you have a limited market going into it?

Limited in size and limited in time, just by the nature of the market. Those two characteristics make it less attractive for some of the more well-funded pharma companies that are better off spending their time, efforts, and money on longer-term projects. They have earnings curves and growth charts that they want to run smoothly up in a straight line. If they are punctuated by sudden bursts of income or earnings from these government contracts, that then—ironically—gives them headaches in terms of trying to project expectations. So the shape of the earnings curve does not sit well with Big Pharma, which is focused on a 12-15 percent a year earnings growth.

What are some other challenges in working with the government to develop products?

Some of the work we are doing now is based on cost reimbursement contracts, but we don't know what size the ultimate prize will be in the form of the procurement contract. And it can all disappear tomorrow, wasting all the good development work that we've done.

And the nature of all the reporting requirements that go with government contracts can really be a burden. It's a system that has been born out of abuse in the past. Because of a few bad cases, suddenly everyone has to do vast amounts of documentation and internal control just to comply with a few regulations. I think it has gone too far the other way now. You almost have to set up a mini-infrastructure simply to cope with the administration and reporting base. 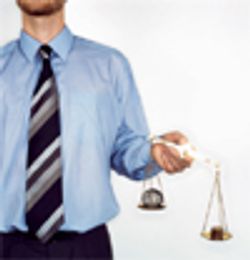 The Cost of Innovation