Erythropoietin is marketed by different companies under different names-Epogen, Procrit, Eprex, Espo, Epogin, Aranesp, and NeRecormon-so it has never made anyone's list of best-selling drugs. But EPO is likely to be the first molecule to reach the $10 billon dollar mark in annual sales. Pfizer's Lipitor (atorvastatin) and two biologic proteins, interferon and insulin, will be hot on its heels.

Erythropoietin is marketed by different companies under different names-Epogen, Procrit, Eprex, Espo, Epogin, Aranesp, and NeRecormon-so it has never made anyone's list of best-selling drugs. But EPO is likely to be the first molecule to reach the $10 billon dollar mark in annual sales. Pfizer's Lipitor (atorvastatin) and two biologic proteins, interferon and insulin, will be hot on its heels. What do these molecules have in common that has led to such success? This article outlines the key factors products need to reach that $10 billion dollar goal and gives an overview of the drugs on the market today with that potential. (See "$10 Billion Dollar Criteria," page 66.)

About 15 years ago, when R&D department heads asked their marketing counterparts to predict blockbuster drugs, a treatment for Alzheimer's came out on top, with some forecasts exceeding $5 billion. Several high-profile research projects of that period-such as inhibitors for aldose reductase, ACAT, 5 Lipoxygenase, renin, and metalloproteinase-failed in clinical trials and were abandoned by the R&D establishment. During that same time, many companies whose new drug applications FDA considered to be the gold standard had disappointments such as Phase III trial failure, NDA delays, withdrawals, recalls, regulatory rejection, or a requirement to generate additional data. Several Big Pharma companies with promising treatments for fungal and bacterial infections, psoriasis, tuberculosis, multiple sclerosis, respiratory syncytial virus, and atopic dermatitis evaluated those projects as having limited market size and consequently terminated them. In fact, Big Pharma seems to be getting out of infectious diseases research altogether.

Hypertension drugs Capoten (captopril/SmithKline) and Vasotech (enalapril/ Merck) and anti-ulcer products Tagamet (cimetidine/SmithKline) and Zantac (ranitidine/Glaxo) are examples of therapies in which the inventor company that created the market lost out to follow-up compounds with huge marketing budgets and global reach.

A review of R&D portfolios of top research companies-Pfizer, GlaxoSmithKline, Roche, Merck, AstraZeneca, Aventis, Lilly, Novartis, J&J, Bristol Myers Squibb, Wyeth, Schering-Plough, and Bayer-which each spend more than a billion dollars annually, and data from the Pharmaceutical Research and Manufacturers of America, provides an overview of research trends. (See "By the Numbers.") In PhRMA's annual survey of new drugs in development, once again cancer, biotechnology products, and infectious diseases topped the list by the number of projects, number of companies involved, and the amount of funds and resources allocated.

Despite that wishful thinking, Lehman Brothers' 2003 report says fewer than 20 products with billion-dollar potential will reach the market in the next five years, and none of those new drugs is expected to make as much money as the current top sellers.

Which therapies will be the new blockbusters? To achieve that status, drugs must fulfill an unmet medical need for chronic disease, restore normal organ function, reverse the aging process, have a much better safety or efficacy profile than an existing treatment-and have an accelerated approval process, preferably with a fast-track designation. (See "Blockbuster Drivers," page 64.)

In the past, more than 70 percent of fast track and priority review drugs were for cancer and AIDS therapies. Treatments for Alzheimer's, diabetes, arthritis, and heart diseases sometimes get priority review, but the criteria are difficult to define because the medical community has clinical consensus. FDA's

criteria for an anticancer to obtain fast track is to show a 20 percent response rate as a single agent and a 40 percent response as a combination therapy in treating cancers that have not responded to other drugs. For a list of conditions that may receive FDA and European fast track and priority review, see "On the Fast Track," page 68.

A review of top pharma and biotech companies' 2002 annual reports reveals that only ten products had sales exceeding $3 billion a year. Of those, seven are new chemical entities (NCEs) and three are new recombinant proteins. (See "Best-Selling Drugs," page 62 and "Best-Selling Biologics," page 64.) It is important to note that IMS World Review sales figures are widely used and quoted in the industry, but there are some discrepancies between companies' annual reports and IMS data. In the case of Prilosec (omeprazole), Zocor (simvastatin), Zyprexa (olanzapine), and Lipitor (atorvastatin), IMS data varied in both directions from the company's sales figure by 16.13 percent, 9 percent, 8.4 percent, and 7.87 percent, respectively. (Prilosec had a billion dollar difference, but IMS did not respond to an inquiry to explain why.)

Claritin, which had sales exceeding $3 billion in 2000 and 2001, only hit $1.8 billion in 2002 because its US patent expired, so it is not included. Also, few Japanese companies give sales figures for their top-selling products in their annual reports. Takeda and Chugai are two that do; Kirin and Sankyo do not. The figures for total erythropoietin sales were provided by the Japan External Trade Organization and are available online (www.jetro.org). They can also be extrapolated from Amgen and Roche's annual reports.

Only five drugs have recently crossed the $5 billion annual sales mark. Four of them achieved that milestone in 2000: AstraZeneca's Prilosec, Merck's Zocor, Pfizer's Lipitor, and erythropoietin. The fifth, interferon, reached that mark in 2002. Wyeth's Effexor (venlafaxine) may cross the $5 billion mark before patent expiry. Other products with that potential are listed in "The $5 Billion Mark," page 66.

Currently, Lipitor is the number-one prescribed medicine for lowering cholesterol and the world's largest-selling drug, with 2002 global sales of $7.97 billion (an increase of 24 percent from 2001). That success may stem from Pfizer's investment in more than 400 clinical trials involving 80,000 patients. One trial, involving nearly 20,000 patients with high blood pressure, showed that the drug reduced fatal and nonfatal heart attacks and strokes.

In 2001, Lipitor overtook Zocor in marketing on the basis of those landmark trials plus approvals for new indications. The success of Lipitor, in spite of its late entry into a saturated market, is a result of its superior efficacy and safety profile demonstrated in head-to-head trials. Lipitor has been used by 28 million patients, and its daily sales amount to $21.84 million. Because approval for AstraZeneca's Crestor (rosuvastatin) was delayed nearly a year, Lipitor may see continued double digit growth and will likely reach the $10 billion dollar mark.

Another molecule that could get there first is erythropoietin, which has daily sales of $23.61 million. Amgen originally developed the product, and the company overcame difficult and prolonged patent challenges from the Genetics Institute, Upjohn, Chugai, Transkaryotic Therapies, Baxter, and Aventis. Amgen's licensing deal with Johnson and Johnson-in which J&J markets the product as Procrit in Europe to all patients and to cancer patients in the United States-has been in litigation for several years, with Amgen often winning in the courts. By adding a sialic acid residue to erythropoietin, Amgen was able to patent and launch a new form of EPO called Aranesp in the three major markets: United States, Europe, and Japan. The new drug has a longer half life and a better safety profile and requires dosing only once a week or 2–4 times a month. Amgen has retained all the rights but has licensed Aranesp to Kirin in Japan and China and to Roche in Europe. By the first quarter of this year, Amgen had converted 25 percent of J&J's European Procrit patients to Aranesp. With a lack of clear guidelines for generic biologics, Amgen may not face generic threats even after its primary patent expiry.

Erythropoietin was the first molecule to cross $8 billion in annual sales and, with a current forecast of more than 20 percent growth, it will top the $10 billion landmark this year. It is the best selling therapeutic protein, accounts for 20 percent of worldwide sales of therapeutic proteins, and in Japan has a 30 percent share of all biotech products sold.

Interferons-marketed as Intron (Schering-Plough), Betaferon (Chiron), Rebif (Biogen), and Avonex (Serono)-crossed the $5 billion annual sales threshold in 2002, mainly as a treatment for multiple sclerosis. Because of patent protection and the absence of a dominant player, competition will keep the market expanding, but total sales may not increase rapidly. Approval for hepatitis C and other new indications should also help expand the market.

If yearly interferon sales reach $8 billion by 2005 and no consensus is reached about bioequivalence for generic biologicals, then interferon may also hit the $10 billion mark.

Wth its current double digit sales growth, Lipitor will cross the $9 billion annual sales mark this year and should reach $10 billion next year. And it may become the first product to hit $15 billion in yearly sales in the next five years. (See "The $10 Billion Mark, page 66.") Expanding diabetic patient base combined with new delivery forms for human insulin such as slow release, oral, and inhalation by the two major insulin producers, Lilly and Novo Nordisk, will likely push sales until they reach the ten billion mark.

Because gastric ulcers are symptomatic and lead patients to take action, the growth of the anti-ulcer market is greater than therapeutic areas such hypertension, dyslipidimea (high cholesterol) and central nervous system disorders. Therefore, Takeda/TAP's lansoprazole, marketed as Prevacid/Takepron, is the only other product that may reach $10 billion in annual sales in the next six years.

On the Fast Track 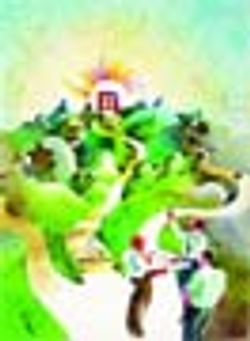 The Path to Smart R&D