The War for Talent

Big Pharma now has a powerful competitor. If firms want to have a sporting chance in that war, they need to think about why biotech is so appealing.

I used to think I would stay in Big Pharma until I retired. After nine years at Eli Lilly and 14 in the pharma industry, I felt I was in the right place at the right time. And then I noticed my colleagues leaving to enter the world of another "B": biotech. As a steady trickle of them departed for better money and satisfying jobs, it was hard not to notice Big Pharma's fallouts—it's a heavily bureaucratic and political institution that favors status quo over change and progress.

For better or for worse, there seems to be a lot of people like me, folks who are discovering that the biotech world gives them the satisfactions and rewards they always wanted—and then some. I haven't seen any numbers I trust yet, but it's pretty clear that in the war for talent, Big Pharma now has a powerful competitor. If companies want to have a sporting chance in that war, they need to start thinking about why biotech is so appealing—and how they can get some of that appeal themselves.

In a lot of ways, biotech is what I used to think pharma was—the right place at the right time. That's partly a matter of technology: With its focus on genetics, biotech is closer to where the action is in pharmaceutical innovation, with a concentration on pharmacogenomics and research that focuses in on patients rather than diseases. But biotech is also at an appealing point in the industry lifecycle. The field is no longer tiny—according to Richard Oliver, author of The Coming Biotech Age, biotech is a $1 trillion industry in the United States. The top companies, such as Amgen and Genentech, are giving traditional pharma companies a run for their money. Business Week named Amgen fourth on the S&P 500 in 2004 for being the most "future-oriented" of the 500 corporations on the list. But at the same time, most individual biotech companies are relatively small and far more entrepreneurial than the traditional pharma company.

Mark Ahn, Ph.D, who left Big Pharma to become president and CEO of Hana Biosciences in San Francisco, felt that the challenge in Big Pharma is that innovations and advancements are slowed. "The bureaucracy which comes with size can also choke off sources of innovation and energy," Ahn said. "A smaller organization can take advantage of its size and focus, while being mindful of the ever-changing demands of growth." The freedom to explore and experiment was an enticement to Ahn, who felt that in addition to more scientific opportunities, the biotech model was more focused on new experiences that concentrate on patients.

Show Me the Money

It's no surprise that employees who left Big Pharma for biotech are doing it partly for the money. The success of biotech's innovations has been financially rewarding, and potential employees are finding attractive packages getting more difficult to resist. Innovation plus interest makes stocks grow exponentially, and pharma companies are aware of biotech's scientific and financial success. And they want a piece of the pie, too. Over the past few years, you'd be hard pressed to find a company that has not purchased or does not have a partnership with a biotech firm. Case in point: Eli Lilly's recent medicines, Cialis and Byetta, came out of a collaboration with a biotech firm; Pfizer's new inhaled insulin is from Nektar.

Some might call this a marriage of convenience since Big Pharma needs access to the next blockbuster drug and biotech needs life-sustaining cash. But these marriages might soon end in separation. Smaller biotech firms like CV Therapeutics and Jazz Pharmaceuticals are following the lead of Genentech and Amgen by becoming more independent. As opportunities and cash flow into smaller biotechs, these companies are not only developing innovative science, but also their own marketing organizations.

This marketing move is to biotech's advantage. Big Pharma has to wrestle with the payers and battle margins, while marketing in popular disease states. But specialty markets are less sensitive to marketplace pressures and require less sales and marketing expense to develop. These models can be considered viable options because the urgency for new science has improved the return on investment (ROI) of these types of business models. They seem to make more sense in today's marketplace. (See "A New Business Model Emerges".)

But money's not the whole story. I was driven from Big Pharma partly by an inability to get people to make decisions. For George Hill, who left a 15-year career with AstraZeneca to work for biotech, the push was his disappointment with the way the company was selling: "You had four to six reps selling the same product to the same doctor," Hill said. "In my mind these mirrored counterparts promoted poor work habits."

But despite a feeling of Big Pharma burnout, both "Bs" operate on the same principles of implementation:

The big difference between Big Pharma and biotech is how well and how quickly they can execute these principles. In this case, size does matter. The flatter organizational structures of biotech make them faster and more responsive. This is an attractive opportunity for individuals from Big Pharma, like me, who were frustrated with the process and bureaucracy.

There's no question that advancement in larger companies takes longer. Couple this with fewer opportunities due to the downsizing of Big Pharma, and people need to make the choice to wait it out or make the switch. By making the switch to biotech, I received quicker validation of my skills and was able to compete for better positions and higher pay. The flatter biotech bureaucracy permitted me to hold a position and title that enabled me to implement my ideas and influence my decisions.

Admittedly, I learned my skills in Big Pharma. On many levels, big companies are great places to learn, with internal training institutes, budgets for learning, and the possibility of outside opportunities. But, too often, after Big Pharma prepares employees for success, it can't come up with career opportunities on a schedule that matches the individual's desire and competency levels. Frustrated employees have little choice but to look elsewhere.

Employees are leaving large pharma firms for biotech. Does Big Pharma understand what makes its employees tick? Biotech's growing workforce might indicate it does not. A 16-year veteran of Big Pharma, Neil Corbin enjoyed his tenure as a district sales manager for Pfizer, but enjoys his position as division sales manager for CV Therapeutics even more. "What I really like about working at CVT is the relative speed with which things happen, the lack of redundancy, the ability to be visible with all departments, and the gratification that comes by knowing the impact I'm having on sales and performance," he said.

So how does Big Pharma perform against Q12? I'm sure employees all over the world ask themselves, "Do I matter at work?" When I was at Big Pharma, it was no different. In 2001, I led a team that came up with a methodology to analyze speaker program ROI. We were able to prove its effectiveness using actual data. However, the data embarrassed a particular director since it made him look incompetent. Instead of proceeding with the methodology, I received a "ding" on my review even though the data and analysis were accurate. Ironically, a portion of this methodology was implemented in 2004, when the company realized its value. Three years of improved productivity were lost due to politics.

Another frustration at Big Pharma is the internal critics of the organization. It's the critic that dooms most winning ideas and initiatives before they get a fair hearing. I have read corporate papers in Big Pharma encouraging people to take risk, but the reality is everyone is afraid of failing. In an environment where critics prosper, taking risks may be a career-limiting move. The result is that innovation is slow and incomplete as managers concentrate on not rocking the boat instead of forward thinking. I witnessed a lot of creative thinking that received private approval, but once these ideas entered the public realm, the private supporters joined the critics and rarely spoke up in support.

Chris Conely, a biotech consultant, has placed more than 145 candidates in biotech directly from pharma. "Big Pharma is not as safe as it used to be," she said. "There is no loyalty to their employees and if people are laid off, they are offered little to no severance. They are promised career advancement on hire only to find out they have to wait until senior management retires in order to pursue their dreams."

Big Pharma understands the need to embrace a new way of thinking in the workplace. It needs to focus on recognition, compensation, and overall job satisfaction if it is going to be successful in this new era.

It is a slow process, and it's up to the pharmaceutical industry to determine if it can make the changes fast enough to retain future leaders. Until then, biotech is here and growing—and always looking for new shining stars.

Scott Hull is associate director of sales and marketing operations with CV Therapeutics. He can be reached at scott.hull@cvt.com 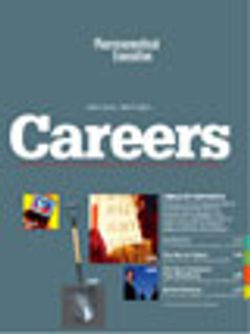 The New Customer: Your Workforce

No End to It