Among the dozens of initiatives in Washington affecting the pharma industry, one common thread is the growing movement to control accelerating expenditures for prescription medicines.

Among the dozens of initiatives in Washington affecting the pharma industry, one common thread is the growing movement to control accelerating expenditures for prescription medicines. In a broad move to stabilize the situation, efforts to encourage generic drug competition, accelerate new drug application reviews, promote safe use of medications, expand oversight of DTC advertising, and improve production processes all aim to ensure that government agencies, insurers, and patients pay only for necessary, safe, and effective therapies.

Think-tank and health-policy organization studies documenting increases in prescription prices and spending have become almost routine. Researchers at Rutgers University issued a report in March showing that elderly patients who need statins to reduce cholesterol would live much longer if they could obtain those medicines at prices 40–50 percent below the average wholesale price (AWP). The Center for Studying Health Systems Change found that 26 percent of Medicaid enrollees can't afford all the medicines they need-a surprisingly high number, considering that Medicaid traditionally provides low-cost pharmacy benefits to that low-income population. The fault seems to lie in increasingly aggressive efforts by state governments to control Rx spending-a trend that industry has attacked.

The biggest news came from the National Institute for Health Care Management when it reported "Another Year of Escalating Costs" in 2001. The study presents pages of data from Scott-Levin documenting that spending on medicines is growing because more people are using more medicines to treat a broader range of diseases and conditions. And they're buying a lot of expensive therapies as well. The implication is that DTC advertising and other promotional efforts allow companies to hike prices and gouge the public. Those looking for some good news from the report will note that the pace of increase may be slowing as consumers switch to less expensive medicines and use mail-order services.

Regardless of which factors are driving the increase, legislators and policy makers across the country are looking for ways to curb the trend. As Congress moves into the home stretch before November elections, prescription costs are emerging as a front-burner issue. Even the majority of Americans with some kind of pharmacy coverage now find themselves paying higher premiums and co-pays and are beginning to complain.

Yet, prospects for serious Congressional action are fairly dim. Proposals to establish a Medicare pharmacy benefit will cost hundreds of billions of dollars, and maintaining that benefit will grow even more costly as baby boomers retire and therapeutics play an even larger role in overall healthcare. Congress is debating a number of initiatives to curb pharmaceutical expenditures, but none are near the finish line.

Looser import controls. Senator Byron Dorgan (D, North Dakota), chairman of the Consumer Affairs subcommittee of the Senate Commerce Committee, continues to press for policies allowing individuals to import lower-cost medicines from abroad, particularly Canada. Congress approved legislation to set up an FDA review process for imports, but the agency decreed the policy unsafe and unworkable and has kept it on hold. National security concerns have dampened enthusiasm for change.

Increased generic drug prescribing. Employers have joined the campaign to revise the Waxman-Hatch Act in an effort to speed generics to market. State governors strongly back such moves, but even generics supporters in Congress are leery of legislative change.

Replacement of AWP. There is strong support in Congress for action to revise the Medicare reimbursement formula, based on the average wholesale price, for therapies administered by physicians. Even so, the specifics remain controversial, and Congress is struggling to address the issue.

Promotion of self-injected medicines. A related issue is whether to broaden current Medicare coverage of injectable therapies to include new products that can be self-administered. Although the change might reduce doctor visits, it could be costly by opening the door to much wider coverage of medicines than the current Medicare program allows.

Pharmacy discount cards. Health and Human Services (HHS) would like Congress to give it authority to support a Medicare discount card for seniors as a first step in providing some price relief. Even if the savings are not great, the agency says the program would give it experience in dealing with pharmacy benefit managers-experience that would be helpful in managing a broader pharmacy benefit in the future. But retail pharmacists oppose a government-endorsed card, so prospects for action are dim.

Medicare pharmacy benefit. Congress' difficulties in dealing with those fairly limited pharmacy payment issues have lowered expectations for action this year to expand prescription drug benefits for seniors. There is little agreement on the shape or scope of added coverage, what it should cost, or where the money will come from.

FDA officials surprised Washington lawyers and consumer advocates alike when they told a federal court in March that they want to suspend the controversial 1998 "pediatric rule" and re-evaluate the policy. The rule gives FDA authority to require pharma companies to study the use of a medicine in children - as opposed to the earlier pediatric policy that offers six months of additional exclusivity for manufacturers that do so voluntarily. A major shortcoming of the voluntary pediatric program established by the FDA Modernization Act of 1997 is that many therapies, including antibiotics, off-patent products, and orphan drugs, offer too little financial incentive to merit expanded study. Congress remedied the problem in part with the Best Pharmaceuticals for Children Act, signed into law in January, that provides funding for the National Institutes of Health to underwrite pediatric studies on neglected products.

The new pediatric rule landed in court when conservative organizations filed suit in 1998, challenging FDA's authority to mandate pediatric studies. The plaintiffs say they are unhappy with FDA's decision to suspend the rule, because a court victory would have killed it outright. Although the agency has not used the mandate to require specific pediatric studies so far, FDA has found the policy effective in spurring pharma companies to conduct such studies and for denying suitability petitions for approval of new dosage forms of existing products.

The public outcry against FDA revocation of the pediatric rule reflects the agency's poor handling of the issue. Congressional Democrats have expressed outrage at any change, and the agency may conduct its review in fewer than two years as a result. 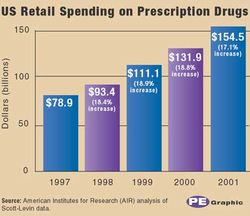