Three Ways to the Future

Developing a drug is still very much a game of chance: a round puzzle of soft edges, with pieces that rarely fit the hard rectangles of time and money. Solving the puzzle correctly-with a new product as the sum of its parts-depends on making that lengthy progression from basic science to registration as linear as possible.

DEVELOPING A DRUG is still very much a game of chance: a round puzzle of soft edges, with pieces that rarely fit the hard rectangles of time and money. Solving the puzzle correctly—with a new product as the sum of its parts—depends on making that lengthy progression from basic science to registration as linear as possible. In this industry, "taking time out" does not mean the pause that refreshes; instead, it's a process in which speed to market spins profits.

The three features in this month's Pharm Exec show how industry is striving to make that venture through the puzzle palace of drug development more predictable—and better positioned. Our cover story on Danish drug maker H. Lundbeck is about managing risk through asset relocation: to retain a reputation for innovation in CNS therapies, get closer to the source, which in its case is the United States. While it has built a small stake in China and other hot emerging countries, Lundbeck is placing its primary bet on this biggest of the mature markets, recognizing that access to US-based talent will jump start its discovery pipeline and, through collaborative networks, reduce R&D overhead too. The challenge is replacing critical patent expirations with organic growth from a small revenue base, in a country where blowout scale is the admission ticket to compete.

Outperforming the competition in piecing the development puzzle will thus be a make or break differentiator for Lundbeck. It's claiming that uninhabited "blue ocean" market space. Observes Ken Kaitin, director of the Tufts University Center for the Study of Drug Development, "most other companies are saying that spending 20 years and hundreds of millions of dollars on developing new CNS drugs, only to see them fail in the later stages of the pipeline, is a risk they are not willing to take."

Next, we venture to the frontier of drug development in a story on how the promise of stem cell research has been slowed by another form of risk, caused by the confluence of morality, ethics, and politics. This risk is more daunting than progress of the science, which senior editor Ben Comer documents as having truly Lazarus-like effects on some patients. Yet solving this development puzzle could literally change the taxonomy of disease—how it is defined, treated, and cured. But here the calculation of risk is reversed: a social and ethical consensus—itself unpredictable, because it essentially represents a leap of faith—must take place before business commits the time and money at the level needed to bring value to patients.

Our third feature is a profile of Richard Bergström, who as director of Europe's main pharma trade association, EFPIA, must plot a straight course through the Orwellian world of "doublethink" that Europe has become today. No other region has such a volatile mix of recession, debt, splintered governments, declining demographics, and divided industry loyalties; nowhere else are government policy makers more adept at holding multiple contradictory beliefs simultaneously, and addressing each of them with solutions that distract, deflect, disperse—but never resolve.

The burden is making sense of this muddle and Bergström, still a fresh face at 46, wants to do it with a forward-framed narrative tied to all the good health that Europe can reap from its $10 billion annual investment in medicines R&D. What separates him from the other company gray suits is his curiosity about the communities that the industry tends to ignore or disparage. Bergström is top of the league at dialogue; in my previous life as an industry committee chair in Geneva, I could always count on him to show up and say something that would rouse all those note-takers to actually take note. He certainly didn't come for the muesli.

Finally, the value from widening the conversation around drug development was underscored by a visit Pharm Exec had recently from the Myelin Repair Foundation, which is building a collective to commercialize new treatments for multiple sclerosis. With a small $40 million budget, this professional non-profit group pursues what a labor union might call a platform of mediation: to advance a compound collaboratively, first identify the cultural and practice insecurities that attach to any relationship between industry and academia, then translate and transform these into a set of tools that end up validating the academic work—to industry standards.

A shorter development cycle starts with taking the time to talk. Product or policy, it's the same. 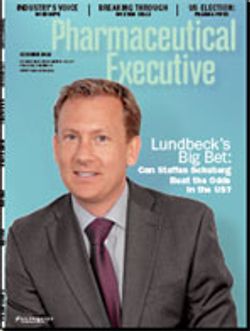 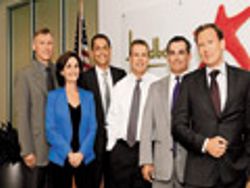 Lundbeck: Bidding for the Stars and Stripes