COVID-19: Is the Vaccine Race Over?

Cliodhna McDonough and Emily Lockey give a UK perspective on the potential pros and cons of the three leading candidates in the COVID-19 vaccine race.

Over the last few weeks, three COVID-19 vaccine candidates have released results based on preliminary data from Phase III human trials. Two of these have shown more than 90% efficacy. Both are mRNA vaccines, a novel vaccine technology for which regulatory approval has never before been granted. The third uses the more traditional technique of introducing genetic code from the COVID-19 virus into human cells via a harmless viral vector and has an efficacy of up to 90%. The announcements, made in quick succession of one another, have contributed to a growing confidence that the end of the pandemic might be on the horizon. They also support the likelihood that the world will have more than one effective vaccine. So do these early results signal the end of the race for a vaccine? How soon can we expect the world to return to normal?

Which vaccines have published results?

On November 9, Pfizer and the German biotech company BioNTech issued news claiming their vaccine was more than 90% effective at protecting recipients from symptomatic COVID-19, with no evidence of safety concerns. Just a week later, final results were announced, indicating that the vaccine is safe and 95% effective. The trial will continue to collect data for two years post-vaccination to explore long-term safety and ongoing protection. Pfizer has said it plans to apply to the FDA for emergency approval imminently, likely to be by the end of this month, and expect to supply 50 million doses globally in 2020, and up to 1.3 billion doses in 2021. The UK has secured 40 million doses, enough to vaccinate 20 million people.

On November 16, Moderna announced that early data showed their vaccine to be 94.5% effective at preventing symptomatic COVID-19. Moderna's results also shared demographic data, indicating that the vaccine is effective in older and BAME individuals, as well as evidence that the vaccine was effective at preventing severe disease. Moderna intends to apply to the FDA for emergency use authorization within a matter of weeks, and the EMA and MHRA have also begun reviewing the trial data. The UK has now secured 5 million doses, enough to vaccinate 2.5 million people. However, Moderna does not currently have an advanced European supply chain in place and it is thought that the UK's doses will not be available before next spring.

On November 23, Oxford University announced that the vaccine they are developing in partnership with AstraZeneca prevents up to 90% of people becoming ill from COVID-19 under a dosing regimen that requires a half dose of the vaccine to be given, followed by a full dose at least one month later. The average efficacy across dosing regimens was 70.4%. There are also early indications that the vaccine might help prevent disease transmission. The Oxford-AstraZeneca partnership has pledged to sell the vaccine on a non-profit basis during the pandemic stage, making it significantly cheaper than the Pfizer and Moderna vaccines. The UK has secured 100 million doses, enough to vaccinate 50 million individuals. However, only 4 million of these doses will be available before the end of 2020.

The most positive message arising from these results is that we are one step further towards achieving a vaccine that can prevent COVID-19. Further, if the mRNA vaccines successfully gain regulatory approval, they would be the first licensed vaccines based on mRNA and are likely to fuel the emergence of new vaccines using the same technology for other diseases.

The Moderna and Pfizer vaccines appear to protect against mild and severe disease. The ability to prevent severe disease will enable countries to reduce the rate of hospitalization and particularly critical care admissions for Covid-19 sufferers, a factor which is often the breaking point for countries struggling to manage the disease burden, even in the developed world.

The biggest disadvantage of the mRNA vaccines relates to the need for cold-chain distribution and storage, which presents a logistical hurdle that will be expensive and challenging to overcome.

Pfizer's vaccine must be stored and transported at -70°C and has a shelf life of five days when defrosted and refrigerated. As a result, the Pfizer vaccine is likely to be disproportionately accessible only to wealthy countries who can afford the requisite ultra-cold freezers. Earlier this year, the German logistics company DHL estimated that 3 billion people globally lack access to the cold-chain resources needed to supply the vaccine. Many less developed countries, which don't have access to ultra-cold freezers, are unlikely to be able to afford enough freezers to be able to make the vaccine available at community health centers or clinics, or pay for the cold-chain systems necessary to maintain the vaccine. As a result, areas with poorer health infrastructure, unreliable electricity supply and remote rural areas are unlikely to benefit.

The Oxford vaccine is easier to store and distribute than the mRNA vaccines due to stability at higher temperatures which will help ease the logistical and supply issues associated with the mRNA vaccines. Oxford University and AstraZeneca have also been working with global partners to facilitate large-scale manufacture and international distribution to ensure rapid and equitable access to the vaccine.

The downside is that, as the vaccine uses a viral vector to transport elements of the virus into humans, it is likely that people will develop an immunity to the viral vector, causing lower efficacy and preventing it from being used for future top-up doses.

Another downside of the Moderna vaccine is that 1 in 10 trial participants reported side effects of fatigue and myalgia, which were defined as significant or prevented daily activity. For those low risk to begin with, this side effect profile is particularly relevant and may lead to decreased uptake. However, the stronger side effect profile might imply a heightened immune response, which in turn could result in a longer lasting effect.

Finally, these early results are based on preliminary data that has not yet been peer-reviewed and follow a very short period of vaccination, so the question remains as to what protection will persist after 6-12 months. Further, the results do not show whether the vaccines prevent community transmission. If the vaccines do not stop infections completely by providing “sterilizing immunity”, vaccinated people may be able to infect others whilst staying safe themselves, a concerning factor for public health officials.

There are currently 11 vaccine candidates undergoing phase III clinical trials and many are expected to read out throughout 2021.

Imperial College are developing an RNA vaccine that uses self-amplifying RNA. The advantage of this over the Pfizer and Moderna vaccines is that a smaller dose is required as the RNA codes not only for the target protein on the virus cell but also enzymes than can copy the RNA, so once injected into humans it replicates the genetic sequence responsible for that target, amplifying the immune response.

The vaccine is more stable at higher temperatures so, similar to the Oxford vaccine, more suitable for community distribution and is likely to be best served as a regular booster jab for maintaining immunity. Imperial are expecting to get market authorization mid-2021, in the hope that the vaccine can be rolled out in time for a winter booster.

The downside is that Imperial has no pharmaceutical company funding, with the majority of funding coming from the UK government and other philanthropic sources. This produces the risk that, if early data is not encouraging, funding will be cut.

One major hurdle that threatens to undermine the pandemic response is vaccine hesitancy. A recent report published by the British Academy and the Royal Society for the SET-C (Science in Emergencies Tasking: COVID-19) Group showed that, due to circulating misinformation and behavioral factors, around 36% of people in the UK are either uncertain or very unlikely to be vaccinated against the virus. If 70% uptake of the vaccine will be needed to provide community protection, this presents a significant problem. The researchers have called on governments to create a public-engagement strategy to address fears, counter misinformation and build public support for vaccination. Further, whilst regulatory bodies have shown willingness to accelerate the approval process, a stringent process must still be followed as any missteps will likely erode public confidence.

Given the preliminary nature of results and the limitations in dose supply, it will likely be another year before the general public in the UK is going to be able to easily access one of the vaccines. Supply will be directed towards priority groups in the early stages, such as front-line healthcare workers and the elderly. Dr. Richard Hatchett, the head of the Coalition for Epidemic Preparedness Innovations, expects demand to exceed supply throughout 2021 and it is likely that a number of other vaccine candidates will come through in this time.

Different vaccines are likely to produce different levels of immunity and will be useful for different populations. Further, differing vaccination regimes and supply chain logistics will make some candidates suitable for some countries and not for others, and it will be important to match the type of vaccine with the available supply chain and the people who will receive it. As such, we are going to need as many vaccines as possible to be able to provide immunization that is effective across all demographics and is globally available. It is therefore important that researchers carry on vaccine trials as long as possible, despite the emergence of successful candidates. However, this may become more difficult once a number of vaccines have been approved as few will volunteer for trials that use a placebo as a control.

As to whether the race for a vaccine is over? As Stéphane Bancel, CEO of Moderna, put it: "No one company can supply the planet. We need three or four vaccines to make it to the finish line…"

Cliodhna McDonough is Director and Emily Lockey, M.D. is a trainee lawyer, both at Fieldfisher. 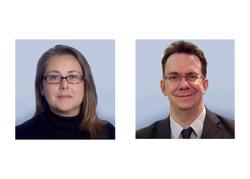 Partnering to Respond to a Possible Nuclear Threat