Focus is on cash: who’s got it, who doesn’t, and what will it mean?

A near-record number of emerging biotech companies are trading at negative enterprise values and by year end, if nothing changes, nearly 40% will have less than 12 months of cash.

This is despite the fact that in 2021, emerging biotechs raised more than $80 billion in follow-on financing, venture funding, and initial public offerings (IPOs), second only to the record amount of $90 billion raised in 2020.

During that time, biotechs didn’t need their cash-rich upperclassmen to validate or fund programs, money flowed in with force and urgency to advance innovation renaissance.

This bull market for biotechs made it tough for large-cap biopharmas to do deals without paying massive premiums, which drove the trend toward collaborations and strategic partnerships.

But rotation into value with the economic recovery ushered in the longest and deepest decline in the XBI biotech index since its inception in 2016. This was punctuated over the greatest surge in interest rates in a seven-month period in history. Biotech valuations plunged and access to capital dried up. The market for follow-on offerings is highly selective to companies generating positive data, and often painfully dilutive. The IPO market has been effectively shut, and is likely to remain so throughout next year.

Restructurings, consolidation, reverse mergers, and liquidations are all being pursued across the sector to extend cash runways.

Emerging biotechs now find themselves with few options for access to capital and in many cases, large-cap biopharma partners may be among the most attractive among them.

This comes at a time when the M&A firepower among the biopharma industry’s largest players has reached a nearly $1.2 trillion for the first time since 2014, according to EY.

So, the tables have turned. Marry that with several known facts:

To quote Rob Davis, CEO of Merck, on the company’s just- reported third-quarter 2022 earnings call, “Our focus, our urgency on business development has not changed. We do see a list of potential places to play. Our priorities have not changed. In fact, maybe we’re even a little bit more bullish and eager to do something.”

That said, “The volatility actually doesn’t help for a conducive M&A environment right now because you have sellers, potential sellers holding on to 52-week highs or all-time highs, which, quite frankly, aren’t too distant in the rearview mirror,” added Davis.

We share the view that some biotech CEOs and board members may have their eyes stuck in the rearview mirror, but the new reality is setting in, or will have to very soon. We expect the deal calendar to heat up, large and small. Wait for it.

Barbara Ryan is Founder, Barbara Ryan Advisors, and a member of Pharm Exec’s Editorial Advisory Board.

Labs and Computing Power: The Missing Link for a Revolution by 2030

A Culture of Quality: The Catalyst to Accelerate Innovation 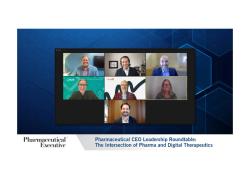 Whole-Person Care: Are We Ready? The Intersection of Pharma and Digital Therapeutics